My passion for art and design started from a young age making scrapbooks, painting, and fashion. My interest in architecture and interior spaces developed through years of travel. Experiencing various buildings and structures around the world intrigued me, every structure was unique and had its own story. This discovery led me to exploring the world of architecture and interior spaces. The past few years as an undergraduate student at UC have expanded my critical thinking skills, design approach, as well as foster my technical skills.  I enjoy creating architectural illustrations, concept diagrams and diagrammatic collages. I am passionate about creating functional, evoking, and appealing interior spaces that are inclusive and sustainable in order to enhance people’s lives. I look forward to further developing my knowledge and skills. The Hamba Safari Series offers a modern approach to traditional African safari-style architecture. The Hamba Safari Series is situated in the National Zoo and Aquarium in Canberra, Australia and consists of three configurations; a function centre, accommodation, as well as a massage parlour. The design approach is inspired by South African traditional wear and focuses on enhancing outdoor and indoor connection as well as incorporating elements of South Africa within each space. This is seen through the angular architectural forms as well as the use of raw materials used across all programs. 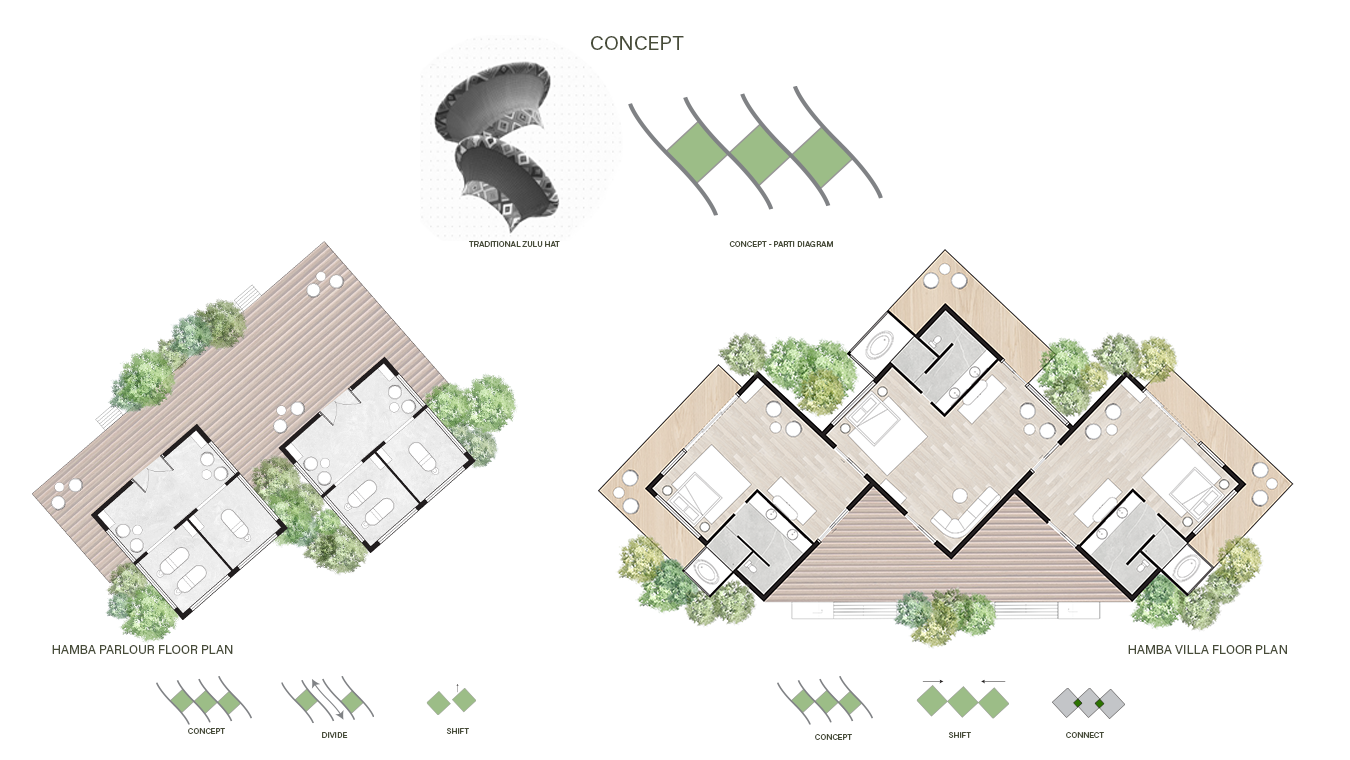 The concept is an ode to South Africa, it develops from the national Zulu tribe in South Africa in which women wear large woven hats during special traditional ceremonies. Although most ceremonial hats differ in colour, they all incorporate strong geometric shapes, woven material, flat tops, and a soft curve throughout their designs. The concept diagrams reflect the process of abstraction which then formed my concept parti diagram (highlighting the strong geometric shapes and slight organic curve). This concept is seen throughout each design in the floor plans, exterior forms, flat roof, as well as the choice of furniture. Hamba villa is the accommodation space located in the expansion area of the zoo, offering a flexible program for guests. The strategic layout and orientation of the rooms frame the view, enhancing the outdoor-indoor connection. A massage parlour completes the Hamba safari series, it offers a complimentary service for individuals that book the Hamba Villa. Guests are able to enjoy breathtaking views of the surrounding environments as well as encounter flamingos during their time in the parlour.